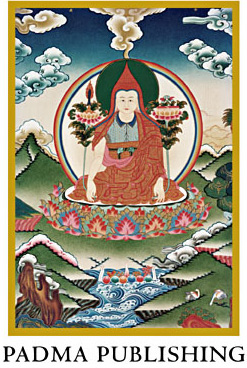 -Picture is a traditional thangka representation of Gyalwa Longchenpa on the front cover of old Padma Publishing catalog.

This is ever popular idea, what do do?
Go to the forest and meditate, Buddha Shakyamuni famously did that for about 5 years and arrived at the threshold of awakening.

But naturally study of already existing things written down by others that have actualized with the liberation to a high degree can be of help.

So, then there is a constant human search for friendship. But so many conversations on similar topics at times start with the air of hostility, why?

Well nearly everyone getting up on the soap box wants to be an expert, we quite naturally do not take kindly to others knocking the soap box from under our feet and if we fall, we feel the pain, metaphorically speaking. The bruised ego syndrome.

Then there is always some one in the mix who has gone far out and explored “I Tell you it’s jungle out there!” They are sitting and listening and without air of self importance say: “I have gone there, seen that, heard that”. Somhow it does not feel right, no drama, how come that person sitting right next to me (must be just like me) telling me they have an experience of something that I can not conceive (never left home, still living with the parents type of setup).

Well it happens, get out there, it’s not just one little jungle, it is a whole world waiting for you.

Here are outtakes from latest and the greatest facebook conversation, that was very good.

Quote from Steven Deedon: “…As I’ve indicated before, there are some tensions between the 1)non-scholar practitioners, 2) those trained in the shedra model — scholarly, but an eye on practice, 3) academic Buddhist Studies modeled (in- or out of) western universities, and 4) scholars studying Buddhism outside of Religious Studies, e.g. philosophy and sociology…”

-In regards to the above in particular. It is important to not miss the point for the trees, you yourself seem to write about it in regards to the “long run”.
The Idea could be about the balance of informed meditation and conversely of the applied study. Uninformed meditation will lead to nothing and unapplied study is knowledge wasted, similar to a roadmap bought for the journey never taken. -Alex

Next quote from Steven Deedon: “…Whether or not one’s guru really knows what Longchenpa, let alone Padmasambhava and Shantarakshita, were up to, he may well have a construal of it that is very helpful for his students…”

-If above is indicative of chronological order as in Padmasambhava and Shantarakshita being earlier then Longchenpa. Well, that idea of seeming distance could be corrected by inclusion of Jigme Lingpa, then Dudjom Lingpa, and on to 2nd Dudjom Rinpoche and Chogyam Trungpa Rinpoche, who were all very recent realized masters of meditation and scholars who left us with many volumes of writing. Chronological idea here is also rendered of lesser import by example of Longchenpa (1308–1364) and Jigme Lingpa (1729–1798). And the idea here is Jigme Lingpa becoming student of Longchenpa several hundred years later, by receiving teachings from Longchenpa in person. Through realization of teachings, more teachings will pour forward, naturally that is how Buddhist transmission is sustained. -Alex

Third quote from Steven Deedon
“…although Buddhists often give tribute to Sakyamunoi’s advice to investigate and interrogate his teachings and decide for yourself, they are quite intolerant of any questioning of contemporary teachers…”

The above is really interesting. I have seen it quite a lot myself all over social media and in person. It is our natural tendency of theism, to find, identify and freeze solid a perfection on outside.
While advice of questioning everything, is also abused to absurdity. It simply stands for a healthy process of learning. Not admiring dogmas from a safe distance. Also, in so many instances to tell some one to be questioning is in fact cruel if they are actually learning, because the subject can be simply beyond them, yet. Then, if you in turn seem to be a master of that same idea, well whatever it is, good for you.

In short I am a big fan of, there is no good and no right, if it does not even pretend to be the middle path, it is all like a little kid trying to be outrageous in the play garden, under watchful eyes of an army of adults.

Thank you for participating and making this discussion interesting, letting me to bubble on for a bit, as you can tell I love to. Even published a book recently full of myself talking to myself about myself! Take a look: https://www.amazon.com/author/sherab