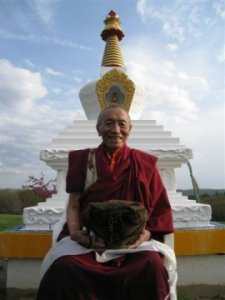 In the  middle of the week leading up to the 19th of June i had a dream in which i clearly saw Khenchen Rinpoche’s face and knew i have to go upstate. But although I knew that I should go upstate i did not recognize the face and did not really know where upstate should i go. So, naturally i let it “slip and slide”….

On Sunday while on Rockaway Beach knee-deep in the water i spotted a hundred dollar bill, then another one, then a single dollar bill. Pocketing them all I was thinking what kind of expence is in store, now that money is suddenly washing up at me…

Later that same night some time past 11:00 I was sitting at a public bench accessing the internet through an open port, having deleted all the messages from inbox I gave it one last look and then saw message arrive that Khenchen Palden Sherab has passed on…

With the above mentioned few dollars I could go right away and try to be near this Lama, this time meaning of my dream started to become more clear…

As I was able to join annual Fire Offering almost 3 times in John Di Jiorno’s “Bunker” (only one time for 3 days) and there also on many different dates received empowerments of Manjushri, 21 Tara, Amitabha, Medicine Buddha, transmission of Vajrakilaya practice, teachings on many subjects, I felt that One time now I should definetely travel.

Upstate PSL Center is build in unbelivable ways and is a true self manifest, perfect mandala. http://www.padmasambhava.org -even at the dawn of the internet this site had some of the best possible content…

Based on my observation I wrote this in an e-mail:

Khenchen Palden Sherab Rinpoche last words were in English: “Going Time” addressed to Jomo Lorrane.
He passed on into the state of samadhi on Satturday at about 8:00 in the evening. (06/19/2010)

Remaining in meditation until the night from Tuesday to Wednesday.
At some point during that night Khenchen Rinpoche released his meditation.
Cremation Ceremony took place on Thursday starting at 3:00 PM. (06/24/2010)

All the ceremonies were conducted by members of Padma Samye Ling directed by Khenpo Tsewang Dongyal Rinpoche who was joined by the classmate friend of Khenchen Palden Sherab Rinpoche from the Riwoche monastery, Khenpo Sonam Thobgyal Rinpoche.

There were many Padmasambhava Center members from all over USA as well as international Sangha members in attendance.

The original e-mail from that Sunday:

“
Hot day in NYC.
In the evening sitting on the bench deleting e-mail build up from the Inbox, just as soon as it is all clear this e-mail lands:
Orgyen Dorje Den to me show details 10:21 PM (15 minutes ago)
…Dear Sangha,
Yesterday one of our precious teachers, Khenchen Palden Sherab Rinpoche, passed into parinirvana. Over the years, many of us received profound teachings and empowerments from Khenchen Palden Sherab Rinpoche, mostly recently the Dudjom Tersar Wangchen in November 2007, bestowed at ODD.

Ven. Gyatrul Rinpoche asked that an email be sent to our mailing list to request and encourage everyone to come for Guru Rinpoche Tsog Practice, tomorrow, Monday, June 21st at 7pm at ODD. Rinpoche has said that it is an important time for us to pray, practice and especially purify our minds through the recitation of the 100 syllable mantra of Vajrasattva.

As a means to express our gratitude to Khenchen Palden Shearb Rinpoche, Venerable Khenpo Tsewang Dongyal Rinpoche and the PBC Sangha, we will be making a collective offering on behalf of our sangha. Please consider making a donation via the Paypal link below.

And here is the text of the letter that Venerable Khenpo Tsewang Dongyal Rinpoche sent earlier today.

On the auspicious day of Medicine Buddha, June 19, 2010 at 8:07pm, our most beloved teacher and one of the great scholars and masters in Nyingmapa Buddhism, Khenchen Palden Sherab Rinpoche passed into parinirvana peacefully and beautifully. All stages of meditation were perfectly demonstrated according to the teachings of the Buddha and Guru Padmasambhava, and as Khenchen Rinpoche himself taught for so many years. He entered fearlessly without any emotion or attachment, joyfully and with confidence at his home, Arya Palo Ling, in the presence of his beloved brother, Venerable Khenpo Tsewang Dongyal Rinpoche, and Jomo Lorraine, and during the sangha’s practice of Vajrasattva in the glorious Copper-colored Temple at Palden Padma Samye Ling monastery. Surrounded by every lush spring quality of gentle breezes, birds singing, flowers blooming, and deer playing in the meadows, he remains in thugdam meditation.

Offering ceremonies began in India, Nepal, and Tibet immediately following Khenchen Rinpoche’s parinirvana, and beginning today we will hold 49 days of offering ceremonies at Palden Padma Samye Ling. We warmly invite the PBC sangha to gather together for these ceremonies. Soon we will be sending a schedule of all of the practices and services that will be held on behalf of Khenchen Rinpoche. Venerable Khenpo Tsewang Dongyal Rinpoche requests everyone to please recite the 100-syllable mantra of Vajrasattva.

In order to remember the sublime qualities of our most kind and humble teacher, here are a few excerpts from A Praise of the Venerable Lama Called the Melodious Words of the Ocean of Devotion, that Khenpo Pema Gyaltsen composed in the late 1990’s:

Although dwelling primordially in the expanse of Samantabhadra,
You possess the magical display of most glorious Vajrakumra.
Maturing and liberating whomever, incomprehensible protector,
All-victorious embodiment of wisdom, to the lama I bow down.

From the rich, fertile soil of your positive merit and generosity,
The sweet smell of saffron arisen from your ethical discipline pervades.
Sovereign of realization arisen from meditation, full bloom of spring,
Endowed with the three grounds of positive merit, to the lama I bow down.

Steadfast, constant root of the wish-granting tree of the four immeasurables,
Luxuriant, full blossom of the activities of the six perfections,
Tending after others, the fruit of the four bodhisattva activities,
Beneficial action, glorious protector, to the lama I bow down.

Having abandoned long ago the obstacles to all objects of knowledge,
Teaching all the ways of Dharma to disciples of good fortune,
Just like a second Lord of Conquerors in the teachings of the Conqueror,
Bliss-gone one with perfect skill in the ten powers, to the lama I bow down.

The most beautiful moon, Manjushri, the wisdom of exalted knowledge,
Coming from the awakened mind of Chenrezig, the great compassion,
Just like Vajrapani, the power and might both unchallenged and unrivaled,
Living countenance that gathers the three families, savior, to the lama I bow down.

Listening, contemplation, and meditation, the three, vast as the rich Earth,
Teaching, debate, and composition, the three, resounding music everywhere,
Knowledge, virtue, and goodness, the three, dramatic play of Samantabhadra,
Perfect monarch of these nine excellent manners, to the lama I bow down.

Possessor of firm skill, virtue, and glory, great holder of the Vinaya,
With marvelous bodhichitta guiding wanderers, hero bodhisattva,
Completely, clearly realized in the four empowerments, great vidydhara,
Crown ornament of all teachers, to the venerable lama I bow down.

Yours in the Dharma,
Venerable Khenpo Tsewang Dongyal Rinpoche